The 2.SS first took part in the Campaigns in the West against the Low Countries and France in 1940, and did so as the SS-V.T.-Division. It first saw action in the main drive for Rotterdam. After Rotterdam the Division, along with other Divisions, intercepted a French Force and pushed them back to the area of Zeeland. Next, it was used to mop-up small pockets of resistance in the areas already captured by the Germans. The Division was then transfered to France and helped breach a stiffly defended canal line, and then participated in the drive on Paris. At the end of the Campaign, it had advanced all the way to the Spanish Frontier.

During the invasion of the Soviet Union, Reich fought with Army Group Center, taking part in the Battle of Yalnya near Smolensk, and then in the spearhead to capture Moscow. Reich came within a few miles of the Soviet Capital in November, 1941, reaching a sort of "High Water Mark" of the Germanadvance in the Soviet Union. With the Soviet Capital within sight of the Division, weather, massive losses and a major Soviet Winter Counter-Offensive pushed the Division back. After a period of very bloody losses for the Division, Reich was pulled out of the fighting and sent to France to refit as a Panzer-Grenadier Division. Part of the Division was left in the East, and they were titled Kampfgroup Ostendorf. Ostendork was sent to join Reich on June, 1942.

In November, 1942, portions of the Division took part in an attempt to prevent the scuttling of the French Fleet at Toulon. Soon after, the Division was retitled again, this time to SS-Panzer-Grenadier-Division "Das Reich".

Early in 1943, Das Reich was transferd back to the Eastern Front where it helped reclaim the crumbling central front around Kharkov. After helping recapture the city of Kharkov, Das Reich along with many other Divisions was thrown into a massive assault into the Kursk Salient, a huge bulge in the Soviet Front line around the area of Kursk. Das Reich pushed upwards of 40 miles into the southern sector of the bulge, but was pulled out of the battle along with the other SS-Division when the offensive was called off. After a period of brief encounters, Das Reich was refit once again, this time as SS-Panzer-Division "Das Reich". In doing so, it left a portion the Division in the East titled Kampfgroup Das Reich, and officially know as Kampfgroup Lammerding. The rest of the Division was transferd to the West to refit, and while doing so also took part in anti-partisan operations in France.

In Winter, 1943/1944, another massive Soviet Winter Counter Offensive managed to encircle German units in the center of the front. The Kamfgroup that Das Reich left behind was one of the units encircled by the Soviet Offensive, and an assault by II. SS Panzer Korps managed to rescue the trapped elements of Das Reich. The Kampfgroup was then transfered to France to join the rest of the Division already station there. The remaining small portion of Das Reich left in the East was renamed Kampfgroup Weidinger and was envolved in the retreats through Proskurow abd Tarnopol.

After the D-Day invasion in Normany, France, Das Reich was comitted to stop the Allied advance, and took part in the many attempts to stop the Allies near Caen and St. Lo. The Division recaptured Mortain, but was forced to retreat when it became apparent the Allies were going to encircle the Division along with a large number of other German units in the Falises Pocket. Thanks to the efforts of Das Reich along with the 9th SS-Panzer Division, a large number of German were able to escape the pocket and retreat to the east.

Pulled back across the Seine River and then to behind the West Wall fortifications in France, the 2nd SS Panzer Division then took part in the operations to punch through the Ardennes Forest in December, 1944. Coming within sight of the River Meus, the Division was halted, and then slowly smashed by fierce Allied counter-attacks. Pulled out of the offensive, Das Reich was transfered into Germany to again refit, and then to take part in the last German offenisve of the war in Hungary to attempt to break the seige around Budapest. This offensive also ground to a halt, and Das Reich spent the rest of the war more-or-less fighting in parts from Dresden, to Prague to Vienna. In the end, most of the Division managed to escape to the West to surrender to the Americans.

Symbol of the division

Photos of the commanders: http://www.dasreich.ca/commanders.html 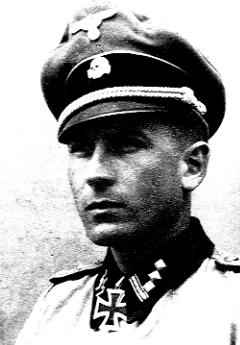 A other nice ss job Mauser !

I like globaly the skull symbols, because when I was 6, I was passionated py the pirats...and now it's the Totenkopf!

Does anyone have any info on this guy , from "DAS REICH" 2/SS-Sturmgeschutz-Abteilung.

Hello, I am trying to find information regarding any mortars that were with "Deutschland" Rgt. or Das Reich. Which unit were they assigned to and is there a known number of them along with men assigned for the 1944-45 time period? Thank you so much for all the help!